Wind is now the largest source of renewable generation capacity in the United States, according to the American Wind Energy Association's latest market report.

It marked the first time that wind exceeded the generating capacity of hydroelectric power, the association said.

The nation’s fleet of dams has long stood as the top renewable energy source, but there has been little market interest in building more big hydroelectric generating stations, the New York Times reported. In the meantime, wind has rapidly expanded — more than tripling in capacity since 2008 — with many more installations on the way.

Any power plant’s potential output can be diminished by a number of factors, including market conditions that render its electricity uneconomical, shutdowns to fix or maintain equipment, orders to curtail unneeded production from system operators and fuel shortages. This is particularly the case for renewable energy sources, whose fuel depends on ever-shifting weather patterns to keep clouds from shading the sun, fill rivers with water and make the winds blow.

Among generators that do not primarily rely on fossil fuels, nuclear plants are the most efficient — they ran at 92.3 percent of their capacity in 2015 — followed by hydroelectric at 35.8 percent that year and wind at 32.2 percent, according to the Energy Information Administration.

Technological advances in wind design, including taller turbines with longer blades that can harvest energy from a greater variety of winds, are leading to increased efficiency. According to the Department of Energy, projects built in 2014, for instance, ran at 41.2 percent of their capacity the next year.

Part of the growth in wind has been fueled by federal tax incentives and state mandates requiring utilities to buy renewable energy as part of their strategies to reduce carbon dioxide emissions.

According to the Department of Energy, the wind industry now employs almost 102,000 workers, up 32 percent from 2015, while the Department of Labor projects wind service technician as the nation’s fastest-growing occupation over the next decade. 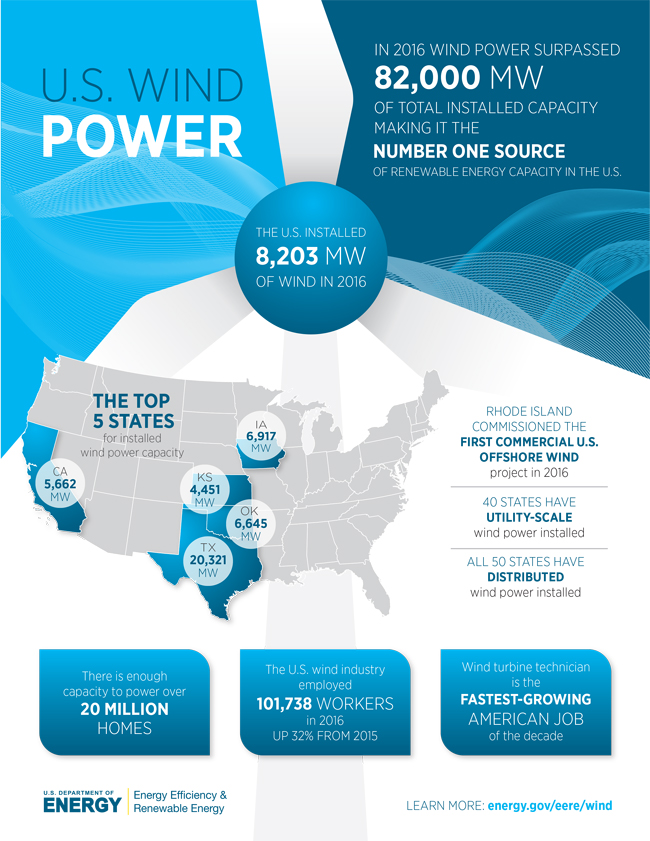