While fans may not realize it, the success of various sporting events and thousands of others across the country sits squarely on the venues in which where they take place.

Those venues, often iconic community structures, are not only where our favorite teams compete, but also home to a new, emerging competition – the place where facility teams are vying to win on the field of sustainability, particularly energy and water savings.

In fact, the National Institute of Building Sciences (Institute) and the Green Sports Alliance (Alliance), through an effort initiated by the U.S. Department of Energy, teamed up recently to better assess how stadiums are taking on the challenge of energy and water efficiency. Over the course of nearly a year, hundreds of venue owners, operators, vendors, concessionaires, designers, affiliated organizations and government officials were engaged to identify current activities, challenges and opportunities to improve.

That led to a report titled “Taking the Field: Advancing Energy and Water Efficiency in Sports Venues”.

THE RACE IS ON

A number of teams and venues are leading the way to reduce energy and water use and realize the related economic benefits. Green building rating systems like the U.S. Green Building Council’s (USGBC) Leadership in Energy and Environmental Design (LEED) are helping venues think broadly about energy and water savings and other sustainable design and operations practices.

Since Nationals Park in Washington, D.C., received certification in 2008, the number of certified sports venues has expanded to 80, for a combined total of 31.1 million square feet.

The USGBC highlighted successful sports venues in its LEED in Motion: Venues report, which echoes “Taking the Field” – that venues are making significant progress.

Many venues have begun deploying clean energy technologies, like LED lighting, solar PV and low-flow plumbing fixtures, which are driving significant savings as a result. The Moda Center’s upgrade to LED lighting saves 939,936 kilowatt hours per year and improves visibility for the Portland Trailblazers. At Petco Park, home of the San Diego Padres, sinks have new automated devices and 60 percent of urinals and toilets have automated low-flow flushers, which all told, saves an estimated 390,000 gallons of water.

As with most building sectors, the widespread realization of energy and water efficiency goals is not unimpeded. Variations in ownership and operations structures and the uniqueness of the facilities present challenges.

Perhaps the biggest challenge is the lack of data to support decision-making, quantify the venues’ impacts and inform best practices, researchers said. Some venues have begun benchmarking in ENERGY STAR Portfolio Manager or other tools, while others do not have the tools, resources or training to effectively manage and measure their own venue’s performance.

Those that have undertaken steps to understand and improve venue performance have no means to compare themselves with their peers to determine if they are leading the pack or if there is still much more to be done. The Energy Information Administration (EIA) in its Commercial Buildings Energy Consumption Survey (CBECS) includes stadiums and arenas in the same building type as funeral homes, bowling alleys and libraries.

The institute and alliance have been working with the Environmental Protection Agency to develop an ENERGY STAR score and certification for these sports venues, but data from venue owners and operators is needed to bring this to fruition. A survey has been developed to capture the necessary data (see http://bit.ly/2k15V6E).

PLAYING TOGETHER TO WIN 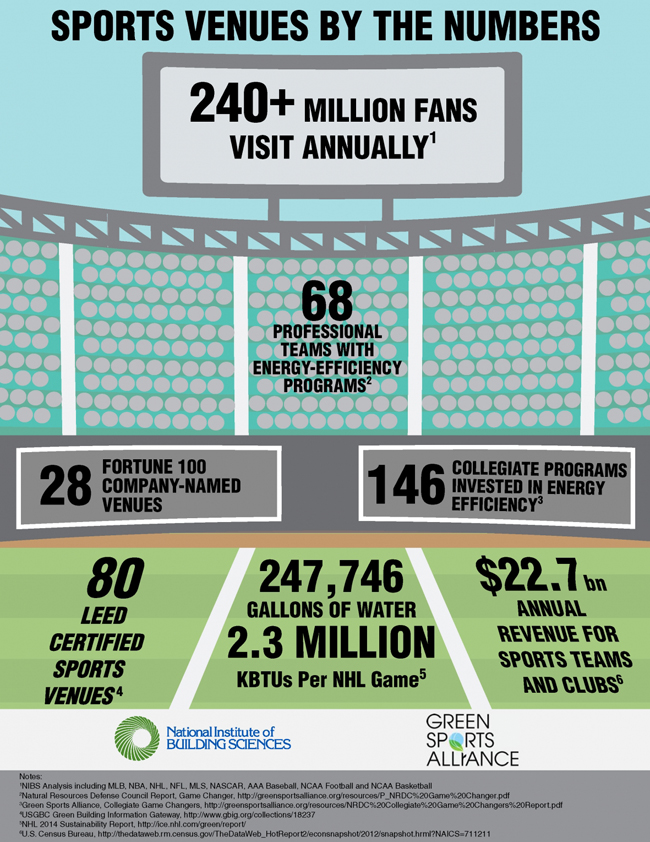