In the United States, more people were employed in solar power last year than in generating electricity through coal, gas and oil energy combined, research shows.

According to a new report from the U.S. Department of Energy, solar power employed 43 percent of the Electric Power Generation sector's workforce in 2016, while fossil fuels combined accounted for just 22 percent, reports Forbes.

Just under 374,000 people were employed in solar energy, according to the report, while coal, gas and oil power generation combined had a workforce of slightly more than 187,000. The boom in the country's solar workforce can be attributed to construction work associated with expanding generation capacity, experts say.

The gulf in employment is growing with net generation from coal falling 53 percent over the last decade. During the same period, electricity generation from natural gas increased 33 percent while solar expanded 5,000 percent.

Fuel production and electricity generation together directly employed 1.9 million workers last year, according to the report, with 55 percent, or 1.1 million, working with fossil fuels. The DoE identifies another 2.3 million jobs associated with energy transmission, distribution and storage. 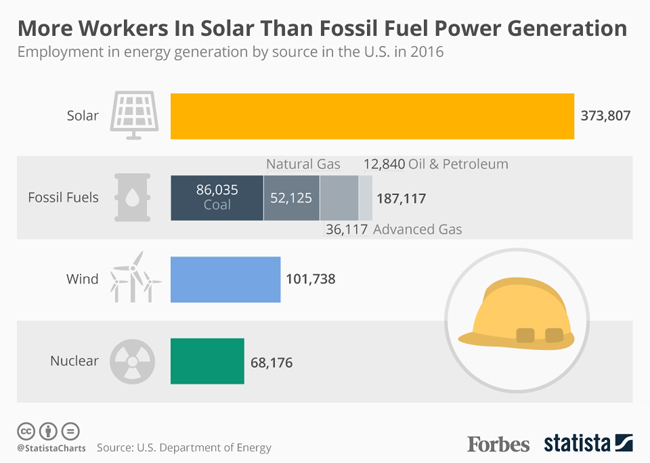