The Redford Conservancy joins a slate of green buildings on Pitzer’s campus, where nearly 70 percent of students live in LEED-certified housing. LEED, or Leadership in Energy & Environmental Design, is a globally recognized symbol of excellence in green building.

The Robert Redford Conservancy, located on 12 acres north of Pitzer’s main campus, held its first full semester of classes and programming in spring 2018 following a year-long renovation of the historic Claremont Colleges infirmary.

That top-to-bottom renovation turned an abandoned, nearly 90-year-old facility into a showcase for responsible, collaborative green building. In addition to earning USGBC’s highest LEED certification in the New Construction and Major Renovation category, the Redford Conservancy is on track to becoming The Claremont Colleges’ first net-zero energy building, meaning it produces as much energy as it uses over the course of the year.

Solar arrays crown the Redford Conservancy’s two outdoor classrooms and are expected to generate approximately 88,000 kWh per year, enough to 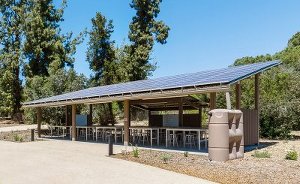 meet the Redford Conservancy’s energy needs. Daylighting—reliance on natural versus electric light—illuminates many of the indoor learning spaces.

To reduce carbon emissions during the renovation, the construction team incorporated more than 90 percent of the building’s existing envelope and structural elements. The team re-used most of the building’s original clay roofing tiles and purchased any replacements from the tiles’ original manufacturer.

Landscaping around the building is made up almost entirely of native plants that need minimal irrigation. Many of these plants were cultivated at the neighboring Rancho Santa Ana Botanic Garden from seeds found on site and planted in the fall, during native plants’ growing season.

The Redford Conservancy design blurs the lines between the outdoors and indoors. Four of the Conservancy’s nine new teaching spaces are outdoors. In addition to the two outdoor classrooms, council rings encourage face-to-face discussions in the open air. A Science Sun Room and an Art Sun Room draw in the outdoors by taking advantage of daylight to minimize reliance on electricity.

The USGBC’s LEED rating system promotes cost-efficient and energy-saving green buildings with lower carbon emissions. LEED certification is based on the total number of points a project earns in various compliance categories, such as Energy & Atmosphere, Sustainable Sites and Indoor Environmental Quality. The Redford Conservancy was awarded LEED points for everything from its energy-producing solar panels to its drought-tolerant landscaping. Its sustainable features include:

Established in 2012, The Robert Redford Conservancy for Southern California Sustainability at Pitzer College is a leader in innovative academic programming and interdisciplinary education around environmental challenges.