Plastic bottle architecture can turn a problem into an eco-friendly opportunity. The EcoARK in Taipei, Taiwan, is one such example.

Built from 1.5 million recycled plastic bottles, the massive pavilion can withstand the forces of nature, including fires and earthquakes, reports Inhabitat.

Designed by architect Arthur Huang, the nine-story $3 million pavilion is powered by solar energy and was built to the mantra of “reduce, reuse and recycle.” 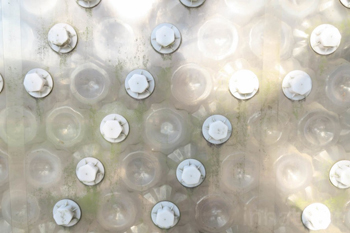 Constructed for use as an exhibition hall during the 2010 Taipei International Flora Expo, the EcoARK pavilion continues to spread its message of sustainability for seven years strong. Though Taiwan is home to one of the world’s most respected recycling programs, the country consumes a whopping 4.5 million PET bottles a year.

To spread awareness about plastic waste, the Far Eastern Group, one of the world’s largest producers of PET products, commissioned architect and Miniwiz founder Arthur Huang to design and build the eco-friendly EcoARK.

As the world’s first building of its kind, EcoARK is an incredible architectural feat. The key to the EcoARK design lay with polli-bricks, a hollow building block made of recycled PET developed by Miniwiz.

The polli-bricks were manufactured from more than a million recycled plastic bottles melted down into PET pellets and re-engineered into a new bottle-like shape. The blow-molded polli-bricks feature interlocking grooves that fit tightly together like LEGOs and only require a small amount of silicon sealant.

Once assembled into flat rectangular panels, the polli-bricks are coated with a fire- and water-resistant film. The EcoARK’s curved and transparent facade is made up of these modular panels screwed and mounted onto a structural steel frame. Although the EcoARK weighs half as much as conventional buildings, it’s resistant to earthquakes and typhoons and can withstand sustained winds up of to 130 kilometers per hour.

Use of recycled plastic bottles isn’t the only eco-friendly feature of the EcoARK. The pavilion was built with low-carbon building techniques to maintain a zero-carbon footprint during operation.

The building stays cool without air conditioning, thanks to natural ventilation. The air inside the polli-bricks also provides insulation from heat and rainwater is collected and reused to cool the building. The polli-bricks’ transparency allows natural light to illuminate the interior during the day.

Solar– and wind-powered systems generate the electricity needed to power 40,000 LEDs that light the building up at night.