Bank retrofits to LED to save energy, money

The Lethbridge location of 1st Choice Savings & Credit Union in Alberta, Canada, was designed to be a bright and inviting facility with an open lobby, a high ceiling and glass facades that allow lots of sunlight into the building. While the architect had the best of intentions, the lighting of the lobby became an issue as unforeseen circumstances came to fruition.

One of those issues was the physical position of the building. Facing north, the large windows offered plenty of daylight on sunny days, which is always welcome in a commercial space. This caused tremendous glare, however, during prime working hours that made it difficult for staff members to do their jobs. To rectify the issue, the maintenance team applied a tint to the windows.

The tinting strategy amplified the illumination issues in the facility on overcast days. The 22 legacy 150W indirect/direct metal halide fixtures provided inadequate illumination for the lobby and many visitors commented on how dark it felt. The fixtures did a poor job throwing light out across the space and instead light would puddle on the floor and ceiling, which resulted in poor illumination levels as both the teller and the customer were blocking the light from each side. Staff frequently found it difficult to perform critical tasks.

Additionally, the metal halide fixtures’ recurrent maintenance issues were becoming cost prohibitive, and 1st Choice would often wait to service the fixtures knowing that another issue was destined to come up shortly. Lamp and ballast failures were prevalent every week or two and a quick fix upgrade to Medium Base MH lamps proved unsuccessful when burnouts continued. 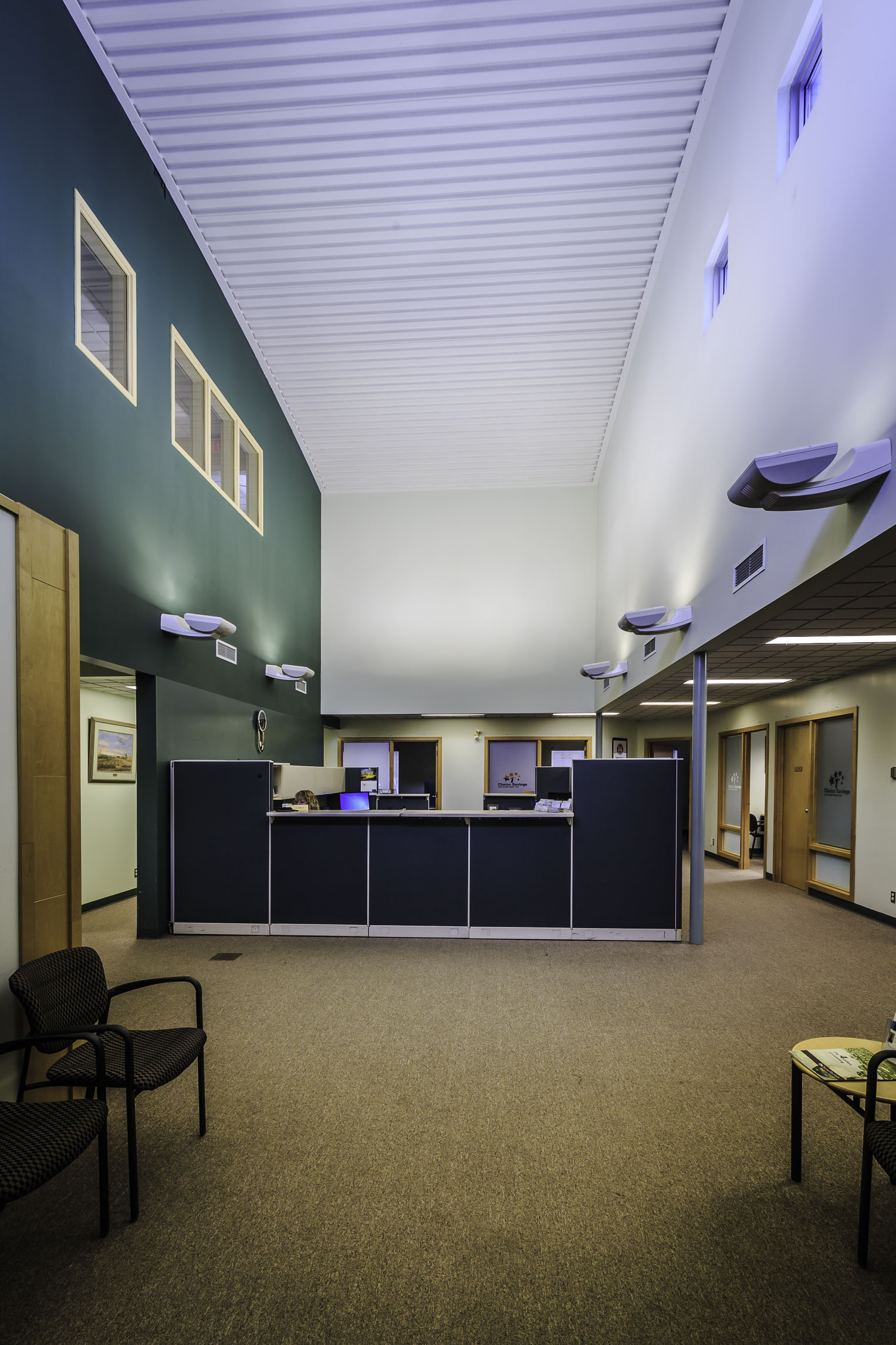 1st Choice called in Optics Lighting. The team realized that LED technology would solve maintenance issues, but noted performance would still be challenging due to the unique dimensions of the room and the ceiling.

The team decided it would be beneficial to pilot the innovative ArcheType X luminaire by KIM Lighting, which is part of Hubbell Lighting. It has the ability to precisely place light where it’s needed most with higher target efficiency. In ArcheType X, LEAR modules are individually controlled to provide custom adjustable light distributions, an industry first. Each optical assembly accommodates 359-degree rotation and tilts between 0 and 70 degrees.

The lighting at 1st Choice is more efficient; it is evenly illuminated across the entire ceiling and the required foot candles are being met on the floor. In fact, the custom distributions of the ArcheType X presented the opportunity to reduce the number of fixtures needed to light the space from 22 to 14 while achieving greater uniformity and efficacy over anything that could be accomplished with a standard IES distribution. Less luminaires are needed to do the job, and 1st Choice is now using 57 percent less wattage.

The improved light distribution has made an impact on visitors and staff. Feedback from the staff members indicates the improved lighting has improved conditions and made them more effective in their ability to serve customers.

In addition to using less energy, 1st Choice is saving money on maintenance costs will less frequent calls to the electrician. It is also in the process of securing a utility rebate as well and expects to incur additional monetary savings once its application is approved.