Many residential and commercial buildings leak air like sieves, wasting up to 40 percent of their heating and cooling energy. The primary reason for this energy loss is gaps and holes that exist in buildings’ air ducts.

Getting an airtight seal on every connection can be difficult; even with skillful installation and generous applications of mastic (the putty used to seal joints), leakage still occurs. Therefore, most people resign themselves to losing money and enduring uneven temperatures, says the U.S. Department of Energy.

Mark Modera, an expert in energy performance at the Lawrence Berkeley National Laboratory (LBNL), however, was convinced there had to be a better way.

In 2014, 41 percent of total U.S. energy consumption (about 40 quadrillion British thermal units) was consumed in residential and commercial buildings. Direct emissions from the residential and commercial sectors respectively account for 5.6 and 5.4 percent of total greenhouse gas emissions in the United States. These statistics add up to wasted energy and environmental damage.

The pathway: From the lab to the market

Modera devised a new way of identifying and sealing leaks — from the inside out, instead of the outside in. For seven years, he worked to commercialize his technology, which cleverly blows an airborne sealant material into a building’s ductwork that seeks out and fills any cracks, leaks and holes. Since the technology was so new, LBNL had difficulty finding an existing company willing to spend the time and money necessary to educate consumers about it.

This led Modera to create the Aeroseal with LBNL in 1997, spending half his time in the lab and the other half commercializing the technology with his new firm. The company was purchased by Carrier, but ultimately bought back by Modera in 2010. Since then, Aeroseal has been franchised dozens of times over and operates in nearly every state.

The technology works by first closing off the inlet and exit points of the duct system (grilles on the walls and floors) and isolating the furnace, making the ductwork an enclosed, contained space. A sealant, aerosolized into tiny particles of 3 to 15 microns, is sprayed through the ducts and deposited into cracks.

“The sealant has nowhere else to go,” said Duo Wang, a member of Modera’s research team. “We had to get the particle sized just right to stick to the edge of the leak. If the particle is too small, it will flow out with the air. If too large, it will fall down before it reaches the leak. But, we figured it out and were able to reduce leakage rates by 90-95 percent.”

While Modera worked at Aeroseal to develop a commercial product for the residential market, Wang refined the technology at the lab for commercial building applications. The first residential spray nozzle he tried was problematic — it had a wide spray pattern, which wasted sealant. A second nozzle, produced by a German company, clogged too easily.

Wang created his own nozzle with a three-ring layout, like a bullseye. The liquid comes from the center ring, like a hypodermic needle. The second ring allows room-temperature air to be drawn around the liquid, keeping it relatively cool before being exposed to heated air. The third ring blows out heated compressed air, which waits until the last second to break the liquid into particles. The result is a nozzle that doesn’t clog or need as much heating power to dry the particles.

This new nozzle allowed the injector to be incorporated into a wand, which allows direct atomization in ducts. It also created smaller particles, which dramatically speed up the sealing process by eliminating the need to reduce particle size with sealant dilution.

Since its founding, Aeroseal has grown to include 600 U.S. franchises and now operates in Europe, the Middle East, Canada, the Philippines and Australia. The technology has been used in more than 100,000 houses and tens of millions of feet of commercial space, including the MetLife Building in New York City and Mayo Clinic in Rochester, Minn.

Chief Executive Officer Amit Gupta said that because leaking ductwork is the No. 1 reason for energy inefficiency, commercial organizations can recoup their investment in as little as five years. Currently, Aeroseal is applying for a patent in pressurizing an entire commercial building at once, rather than requiring technicians to move from zone to zone. Other areas for expansion include gas pipelines and other structures that would benefit from being leak-free.

Aeroseal seals 3,000 to 4,000 systems per year, with more homeowners and facilities managers looking to seal their duct systems and save energy each year. 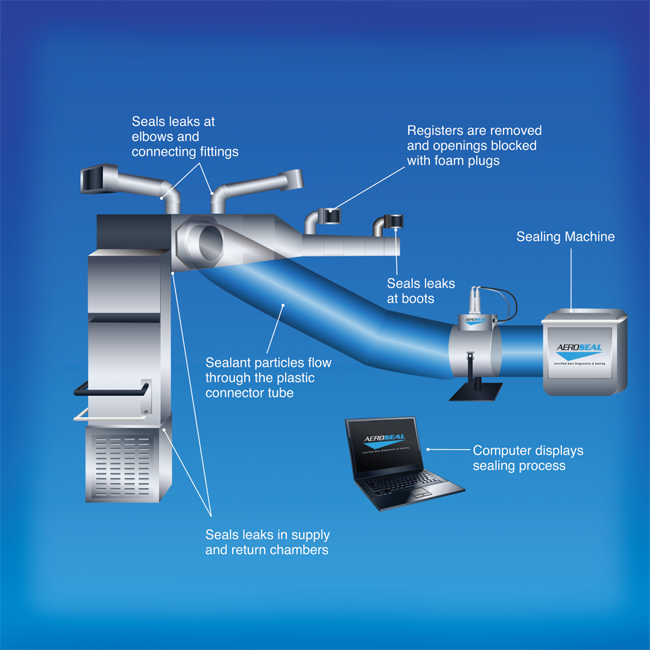