You might say business is really buzzing atop a Pasadena office building.

The “business” consists of four active beehives stacked neatly in twos near the east end of the roof at 1055 E. Colorado Blvd. in Pasadena. The hives are maintained by Best Bees, a Boston-based company that delivers, installs and manages beehives throughout the U.S. for commercial and residential customers, reports the Pasadena Star-News.

The company also maintains rooftop gardens at the five-story Pasadena building. It includes tomatoes, zucchini and a variety of other vegetables. Some of the plants — including basil and pineapple sage — provide fodder for the bees’ pollination. The honey they produce and the vegetables are routinely distributed to tenants in the building. 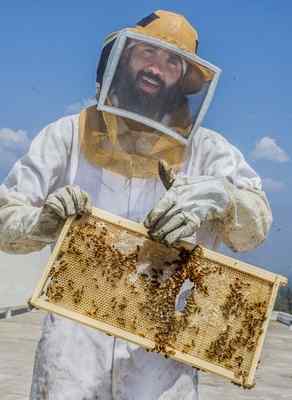 “They produce about 10 pounds of honey a year on top of what we leave for the bees,” said Noah Wilson-Rich, the company’s founder and chief scientific officer. We’re looking to improve the health of bees and get more bees out there.”

Bee populations are on the decline as the result of habitat loss and pesticide use, according to “Pollinators in Peril,” a study released this year by the Center for Biological Diversity. The most comprehensive global report so far found that more than 40 percent of pollinators — mostly bees — are facing extinction.

The impact could be severe because pollination by bees contributes to plant diversity and crop pollination that provides 35 percent of the world’s food supply.

“We’ve been at this for eight years,” Wilson-Rich said. “We have an exclusive deal with Beacon Capital Partners, which owns the commercial buildings where we have the hives and that has made the properties hot. You create a real benefit if you can get sustainable honey from the buildings; a lot of tenants want this. There are lots of millennials who like to put their money into sustainable businesses.”

Al Scaramelli, a managing director with Beacon who oversees the company’s sustainable and environmental programs, said Beacon has more than 42 million square feet of office space throughout the nation, which is LEED certified. A Leadership in Energy and Environmental Design certification means that a building is energy efficient, so it uses less water and energy and also reduces greenhouse gas emissions.

“We’ve done a lot of innovative energy, water-conservation and waste-management programs,” Scaramelli said. “And this continues in that direction. We think the honeybee program is really wonderful. The tenants love the concept. We have queen bee contests and also give rooftop tours of the hives and gardens to our tenants. This is very popular stuff.”

Matt Vannucci got his first look at the hives on Friday. He’s the director of worldwide facilities for Guidance Software, a cybersecurity firm which is the largest tenant in the building.

“It’s pretty cool,” he said. “They share the honey and vegetables. I have some of the honey at my house. Bees are dying at such a fantastic rate, so it’s neat that they’re doing this. When I go to check out office space in Chicago or San Francisco, I’ll look to see that the buildings are Energy Star-rated and have LEED certification. Those are good boxes to check. It shows that the management is involved with its tenants.

“And the beehives are a unique, fun thing to have.”

Best Bees charges $300 for a set-up fee and $1,250 a year to maintain residential hives that are one hour or less away from a downtown area. Hives that are located more than an hour away and up to two hours from the downtown core are $1,350 a year. The yearly cost for commercial beehives is $1,750.

Best Bees hopes to improve the bee population through the Urban Beekeeping Laboratory and Bee Sanctuary, its nonprofit arm that is on a campaign to raise $750,000 by the end of the year. The funds would be used for the company’s research and to improve bee health.