In 2017, Georgetown transitioned into a 100% clean energy city. I wanted to find out why & how

I first learned about Georgetown through Al Gore's 2017 An Inconvenient Sequel. Georgetown, Texas, was featured as a model American city for combating climate change. I wanted to visit the city during this epic milestone and coincidentally, Al Gore was in town the same day. 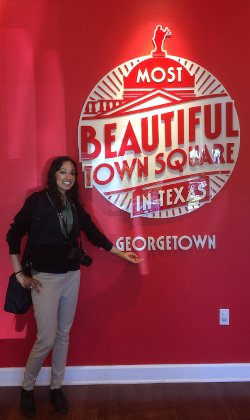 He was serving as a keynote speaker for Grid Next, a renewable energy conference that leads discussions between utility providers on the future of clean power.

Walking around Georgetown, there are few physical manifestations of the city's choice to exclusively harvest renewable power sources.

Instead, a tightly knit town square, which residents have proudly designated the most beautiful town square in Texas, spans the center, surrounded by a variety of local mom and pop shops. Local must-sees, including William County Courthouse and Blue Hole Park, tell their own stories and have become the symbols of this small city.

Now, however, Georgetown holds higher stakes as it becomes part of a much larger conversation, one that is critical in a politically fueled battle of fossil fuels vs. renewable energy sources.

So where does Georgetown's success begin? Let's start with stating that, as of this post, there are fewer than 10 cities in the United States of America that have adopted 100 percent clean energy targets. Georgetown, Texas, was one of the first cities to achieve this success! (FYI- additional current American cities with this distinct honor are Aspen, Colorado; Burlington Vermont; Greensburg, Kansas; Rockport, Missouri and Kodiak Island, Alaska.) By 2035, dozens more American cities will be at or near this same milestone! Isn't this exciting! Sierra Club has compiled an amazing list of 100-percent renewable energy cities. Check it out to discover eco-friendly cities near you!

When I first learned about Georgetown, I was honestly taken aback that such a small and conservative city could be willing to forgo fossil fuels. (Let's face it: the views of Texas former governor Rick Perry do not scream "fight climate change!)

After doing some sleuthing, I discovered Georgetown began rethinking its power sources way back in 2012. When given the option to renew its energy contract, Georgetown knew the common sense option was to be as economical as possible. Solar and wind maintained stable prices for the long-term future, while oil and gas prices would continue to fluctuate.

Renewable energy source contracts included fixed prices for the city's long-term future, while fossil fuel-based contracts would remain at a fixed price for the short-term future. What's more is that the clean energy platform has drawn plenty of national media attention (and Al Gore!) and has been a great way to bring in economic investments. By 2016, Georgetown was 90 percent renewable, and in 2017, the city hit its 100 percent renewable energy target as initially set out.

Both wind and solar contribute to the cause. Interestingly enough, the power isn't produced locally, but is generated on a wind farm in Amarillo, Texas, 500 miles away! Additionally, construction of a solar farm is currently underway, and Georgetown's power will be supplemented by solar energy in Summer 2018.

Farah Naz Ahmad was born in New York City and holds a Bachelor of Architecture degree from The City College of New York. She is a LEED Accredited Professional in Building Design + Construction. Her career goal is to make an impact on the field of sustainability in design and construction. Her past roles as President of CCNY's American Institute of Architecture Students and as a team leader for the US Department of Energy Solar Decathlon have increased her passion for eco-friendly design.