Taco's iWorX platform is accessible through tablets and mobile phones. (Below) The iWorX hub is installed in a commercial building. Photos courtesy of Taco

Automation is designed to make life easier. But when it comes to installing systems in buildings, the process for owners and managers is usually anything but easy.

Understanding the chore a setup can be, comfort solutions company Taco has expanded the capabilities of its popular iWorX automation platform by putting ease of use at its core.

Perhaps most significant, Taco has introduced a setup wizard to allow building owners and commercial system designers and installers to connect HVAC units and other smart ventilation equipment by simply answering a handful of questions about those products. Interfacing software – now portable through an integrated tablet or smart phone – even shows images of the Wi-Fi-detected equipment intended to be connected and controlled.

“We attempted to take all the complexity out of automation,” said Ric Turmel, vice president of engineered products and systems for Taco. “It’s almost plug and play – as simple as setting up a programmable thermostat.”

The intuitiveness ushered in as part of the update comes at a time when integration of various smart digital building networks can face high hurdles. A number of control systems are proprietary technologies that prohibit smart equipment made by competitors or open protocol systems from syncing with their network. Also, updates can even require coordination with the manufacturer. 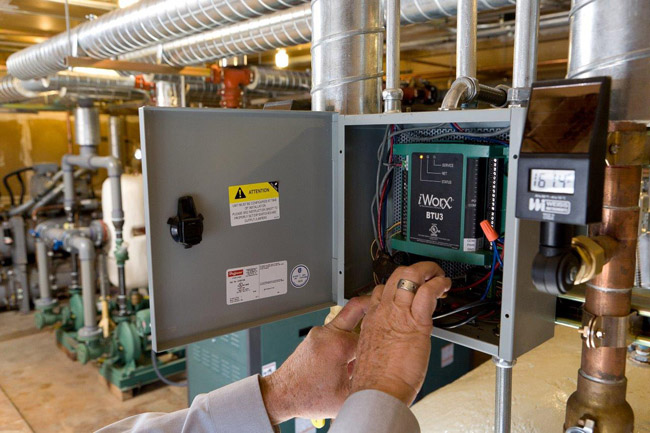 “Once you have another system in there, you’re married to them,” Turmel said. “If you’re going to make change, you have to go back to them to make change. You have limited ability as an owner.”

iWorX functions in an opposite fashion, making it an attractive choice, he said.

Though iWorX can be monitored and controlled through a desktop computer, the new design includes a corresponding app for portable devices. That app – a likely platform option given its commonality – enables system access and control from any spot where it can connect to the Internet.

The app also receives free upgrades for the life of the iWorX system in the building.

The updated iWorX platform not only brings about convenience, but also slashes installation time – by about a third – and cost. No longer do building operators need a programmer for sometimes-costly system setup or to provide instruction on its use.

“You don’t have to actually go through and input codes,” Turmel said. “The code is done, programmed and tested before the controller leaves the factory.”

iWorX is used mostly in spaces of 200,000 square feet or smaller, including K-12 buildings, banks and churches.

Turmel estimates that a sufficiently coordinated system can cut expenses by as much as 50 percent.