3 things you should know about building-integrated solar power

Building-integrated photovoltaics (BIPV) are dual-purpose, as they serve as the outer layer of a structure and also generate electricity for on-site use or export to the grid.

BIPV products deliver savings in materials and utility costs, reduce a building's carbon footprint, and may add another layer of architectural appeal.

Here's a look at three considerations for integrating solar power into your next building project.

Solar panels can be integrated into various parts of the building, and often will be invisible to casual bypassers.

Façade. Solar panels of semi-transparent thin-film or crystalline solar panels can replace or cover traditional glass windows. Because of their location and orientation, these panels produce less electricity than rooftop panels but may offer a larger surface area to make up the difference. For retrofits, solar panels can cover outdated and unattractive exteriors.

Researchers at Berkely National Laboratories are developing window materials that switch from being see-through to blocking the heat and convert sunlight into electricity.

Rooftops. Roofing material with PV functionality can replace roofing material or even serve as the roof itself. The two main types of BIPV roofing are an integrated single-piece panel made with laminated glass and solar shingles that replace regular roof shingles. BIPV shingles entering the marketplace with  Tesla and 3-IN-1 ROOF offering solar shingles for commercial and residential applications.

Glazing.Skylights and greenhouses that allow daylight to penetrate and generate electricity are made with ultra-thin solar cells.

PV modules can be integrated into building components such as awnings and may serve as the structure as in the case of bus shelters and parking lots covers. In dense urban areas where land is expensive and rooftops are small, BIPVs offer the best option for incorporate renewable energy into a building, according to the according to the NREL's Building-Integrated Photovoltaic Designs for Commercial and Institutional Structures: A Sourcebook for Architects. 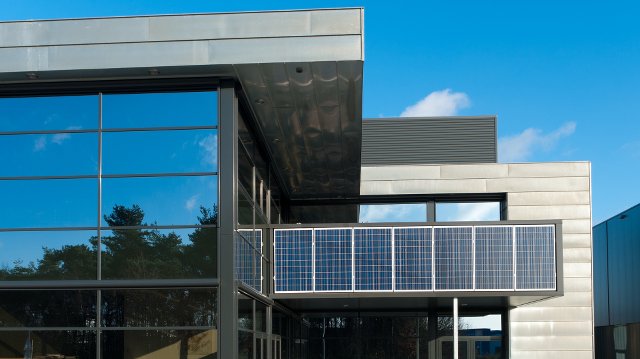 2. Solar power capacity can be retrofitted

Usually, building-integrated PV systems are part of the architectural design stage and added during initial construction. Building-added PV (BAPV) is planned and built during a retrofit.

Both systems can provide savings in materials and electricity costs, reduce pollution, and add to the architectural appeal of a building. Substituting PV for standard materials allows builders to reduce the incremental cost of PV systems and eliminate costs and design issues for separate mounting systems.

Shade. Trees, nearby buildings and other structures will reduce system output.

Latitude. Distance from the equator will dictate the optimal tilt angle for solar panels to receive solar radiation. However, solar panels built into shingles, for example, have less flexible installation options for the optimal angle to the sun.

Of course, the first step in planning any solar installation is to maximize the energy efficiency of the building to reduce the overall electrical load.

A holistically designed BIPV system will reduce a building’s energy demand from the electric utility grid while generating electricity on site and performing as the weathering skin of the building, according to the NREL sourcebook.

"Roof and wall systems must provide R-value to diminish undesired thermal transference. Windows, skylights, and facade shelves can be designed to increase daylighting opportunities in interior spaces. PV awnings can be designed to reduce unwanted glare and heat gain. This integrated approach, which brings together energy conservation, energy efficiency, building envelope design, and PV technology and placement, maximizes energy savings and makes the most of opportunities to use BIPV systems," according to the NREL sourcebook.

Gary Wollenhaupt is an experienced writer and editor, with a background as a daily newspaper reporter as well as corporate and agency public relations and marketing. He is constantly looking for affordable green upgrades to make to his home in eastern Kentucky.